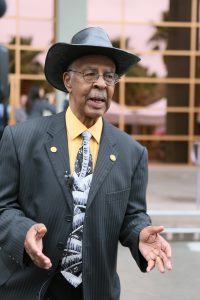 “The entire CSN family wishes to express our deepest condolences to Dr. Meacham’s family,” Zaragoza said. “Dr. Meacham was a giant in CSN’s past who changed the lives of thousands of college students. His legacy will continue to shape the college and the state of Nevada for generations to come.”

Meacham was CSN’s longest serving president and its first African American president, overseeing the college at a time of tremendous growth. He spearheaded the effort to build the much-needed Charleston campus, now the college’s largest campus.

Meacham was born in rural Alabama in 1936. He worked his way up to prominence on the national higher education stage. After many years as a college and high school band director, he served in executive positions in the Dallas County Community College District and in the Austin, Texas Community College System.

In 1983, he was named the fourth president of what was then Clark County Community College, which later became the Community College of Southern Nevada during his tenure, and later still the College of Southern Nevada. Dr. Meacham served as the college’s president until 1994, to this day the longest tenure of any leader at the state’s largest higher education institution.

After leaving CSN, Dr. Meacham spent another nine years in higher education as a tenured professor at UNLV.  He was later named a professor emeritus at UNLV and president emeritus at CSN.

In 2015, CSN named the student services building on the Charleston Campus the Paul E. Meacham Student Services Building in honor of his steadfast dedication to the college and its students.

This entry was posted in Uncategorized. Bookmark the permalink.