Our NEW & NOTEWORTHY selections highlight recent additions to our collection that have received significant acclaim in their field. 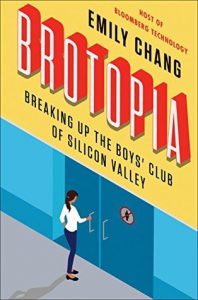 Talk about a bad bromance! If you’ve ever wondered what it would be like to work as a female engineer in one of Silicon Valley’s top tech companies, look no further than Emily Chang’s new(ish) book, Brotopia: Breaking up the Boys Club of Silicon Valley. In this national bestseller, Chang addresses how companies like Google, Uber, and Facebook continue to struggle to recruit and retain talented women from the computer science field (where only a scant 18% of degrees are awarded to women), as well as shed light on a “bro” culture within Silicon Valley described as oppressive, sexist, and often misogynistic.

In addition to explaining how the tech world became dominated by “nerds” turned to “bros” as a result of money, power, and opportunity, Brotopia examines the rise (and fall) of both well-known and not-so well known female leaders in the profession, uncovering how their paths to success are inextricably intertwined with negotiations between socially acceptable female roles within their families and their ambitions toward career achievement. Chang also addresses how women in tech who are not white, cisgender, able-bodied, or middle class face additional industry hurdles and resistance as they regularly encounter racism, ageism, and classicism.

While the overarching theme of Brotopia revolves around seemingly never-ending patterns of discrimination, harassment, and silence within the most powerful companies of Silicon Valley, Chang ends the book with an optimistic view of how teenage girls today are being encouraged and mentored into computer science programs so that they can “have rewarding careers in tech” and make a dent in the universe in way that may change world for them- and for all. So while it may appear that Silicon Valley is overrun by a “bro” culture that demands women to not only be “good enough,” but “exceptional” in order to be recognized, Brotopia challenges our next generation of coders and engineers to stand up and start dismantling the notion that the only acceptable kind of genius in the tech world is one that fits an outdated stereotype of a 1980s male “nerd.” Sorry, Poindexter, you’ve been replaced!

Emily Chang is an Emmy award-winning journalist and a former CNN correspondent who currently anchors and executive produces the daily business and technology program, Bloomberg Technology. She regularly interviews some of the top tech and media executives, investors, and entrepreneurs on Bloomberg Studio 1.0 and was named one of the top 100 influential tech people on Twitter in 2014 by Business Insider.

You can find Brotopia: Breaking up the boys’ club of SIlicon Valley on the shelves at the North Las Vegas and Henderson Campus Libraries and also as an eBook.