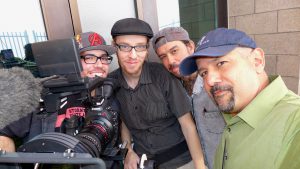 John Aliano, director of CSN’s videography and film program, right, with three of the program’s students.

“I am incredibly proud of our students and the hard work they put in to create these films,” said John Aliano, director of CSN’s videography and film program.

CSN students were nominated for 10 Emmys this year. The eight wins were the most CSN has ever won and the most by any college in the competition.

“That’s just a huge number, and to be able to compare a two-year institution against two- and four-year public and private institutions and say we’re one of the best, that’s just fantastic,” Aliano said.

CSN students are required in many film and videography classes to produce a short film. The program puts a heavy emphasis on practical production skills, focusing on getting graduates into the industry. Five years ago, Aliano created the CSN Short Film Showcase, held each fall to show off the films to the public. This year’s Showcase will be held Oct. 14, and all of the award-winning films will be shown.

This year’s winning films include fiction and non-fiction. The big winner was “Pete the Pilot” by student Dontae Carter, a story about a boy who loses his favorite toy and goes on a daring mission to rescue it. Carter’s film took home four Emmy awards, including Short Film, Animation/Graphics/Special Effects, Editing and Directing.

This entry was posted in Press Releases and tagged Emmy Awards, john aliano, videography and film. Bookmark the permalink.