Math, Marshmallows and the Future

What do you get when you put dozens of middle school students in a room with a couple of College of Southern Nevada professors, a pile of uncooked spaghetti and gobs of marshmallows? 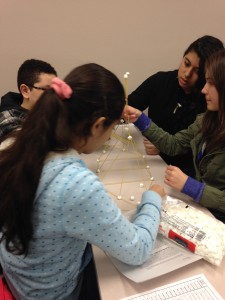 Math. You get math.

“Math opens up doors to you,” chimed in CSN math professor Patrick Villa.

The duo was part of a workshop put on Friday for about 120 students from Harney Middle School designed to expose the 7th- and 8th-graders to science, technology, engineering and math — the so-called STEM fields.

“You have great minds,” CSN President Michael Richards told the youngsters. “You really do. You can do this. There are opportunities for you beyond imagination.”

The conference was put together by the state Department of Employment, Training and Rehabilitation, the Clark County School District’s Gear Up program and CSN.

It featured workshops by CSN professors in math and science, as well as inspirational words from people working in those fields.

“We have robots on Mars. On the international space station,” said Margaret Taylor, a CSN computing and information technology professor.

She showed off a couple of small robots as the students looked on.

“If your parents have a car less than five years old, 80 percent of that car was built with robots.”

Missy Young, executive vice president at Switch Communications, a Las Vegas-based technology company, told the students that there were virtually no limits on what they could do with their lives if they study math, science and technology.

“You can do anything,” she said. “Every single field today uses technology.”

Even basic engineering, such as you might encounter when trying to build a structure out of dry spaghetti noodles and marshmallows.

That’s what professors Hughes and Villa had the students in their workshops do as a way to show them that math matters, and that it can be fun. The student group with the tallest tower (these things have been known to reach higher than 6 feet — really) won.

How’s that for proving math can be fun?