CSN is going solar this summer

I am proud to announce that CSN’s first solar panels will be generating electrical power by September 10.

CSN has been awarded a $500,000 rebate from NV Energy to place enough solar panels on the roof of the D Building at the Charleston campus to generate 100 kW of power. 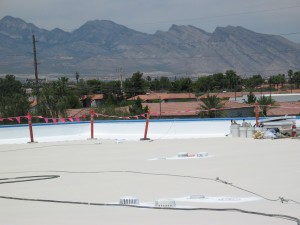 D Building roof, where 110 kWhrs of solar panels will be installed by the end of summer at the CSN Charleston campus.

Here are some interesting facts about the environmental impact of this installation:

The amount of electricity the system will produce over a 25-year lifetime: 3,625,162 kWh

Barrels of Oil Offset, over a lifetime: 7,374
(The number of barrels of oil required to generate the same amount of electricity that our system will produce during a 25-year lifetime.)

Smog Emissions Reduction, lbs:  13,070
(Nitrogen oxides are a key contributor to the formation of ground level ozone, a major component of smog. Ozone irritates the eyes, and aggravates respiratory problems. It is our most widespread intractable urban air pollution problem.)

Car Miles Not Driven, Lifetime: 6,435,582
(Using electricity from fossil fuels and driving cars are the two personal activities that have the most significant environmental impact.)

As part of the rebate agreement, we are required to provide a public monitoring system and the college is investigating ways to show just how much power the panels are generating in real time on the Intercampus Communication System. So the panels will not only reduce our carbon footprint but help educate our students about solar power.

There will also be solar panels on the Las Vegas Fire Station/Instructional Facility, when it opens this fall. As many of you know this unique public-public partnership, constructed by the city and located on the southwest corner of the CSN Charleston campus, is a LEED equivalent facility. 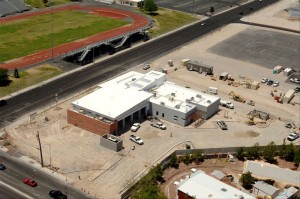 The City of Las Vegas Fire Station/CSN Instructional Center roof where solar panels will be installed this summer.

The D building installation is the first solar project at CSN and part of our solar strategic build out plan that will eventually maximize space on all three campuses for panels, pending funding.

We estimate that the Charleston campus will one day generate as many as 3,096 kWhrs, Cheyenne will create as many as 2,500 kWhrs and Henderson will be able to boast 1,200 kWhrs and this is without any new buildings or additions.