We are at the midpoint of the semester and there are a number of updates for you included in this month’s Chronicle.

Thanks to all the students, staff and faculty who participated in Hispanic Heritage Month activities at CSN. As you know we celebrate our position as the most diverse higher education institution in Nevada and as the first Hispanic Serving Institution in the state. This photo here is from the CSN Latino Alliance “La Gran Finale” event held on Tuesday, Oct. 11, 2016.

The revenue forecast for the state’s next budget cycle, starting July 1, 2017, is bleak. Budget officials estimate a $400 million shortfall and all state agencies, including NSHE, are being asked to cut their requests down by 5 percent. For CSN, this is equivalent to a $4.4 million cut each year over the next biennium. We’re looking at our expenditures now and looking for areas to adjust and scale back. 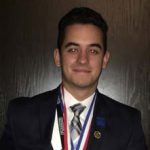 Two CSN students have been named 2016 Coca-Cola Leaders of Promise Scholars, and we couldn’t be more proud. Jorge Lopez Alvarez and Jill Robinson both received the prestigious scholarship, awarded to only 200 community college students nationwide each year. This year’s recipients were selected by a panel of independent judges from more than 1,100 applicants. The Leaders of Promise Scholarship is sponsored by the Coca-Cola Scholars Foundation.

The Accounting Department brought in several speakers for its lecture series in October and presented a student with a $500 scholarship. Congratulations to student Bethany Williams, who was honored with the scholarship for her excellent GPA and her commitment to the program. Speakers included Dennis Meservy who owns his own accounting firm, and Jeff Breeden and Brett Jackson of the CPA firm Stewart, Archibald, and Barney, as well as Scott Montes, Controller, of the Las Vegas 51s, and Darryl Raiford, an Accounting Department faculty member.

While on the topic of scholarships, it is important we highlight the Engelstad scholarship recipients, who received their awards this fall semester. A select group of 25 health sciences students were named and will receive a monetary scholarship funded through the Ralph and Betty Engelstad Foundation. The CSN Engelstad Scholars are distinguished students who have been accepted into one of CSN’s limited entry health sciences programs. They display academic excellence, a commitment to serving the community and have demonstrated the ability to overcome barriers to pursue their education. 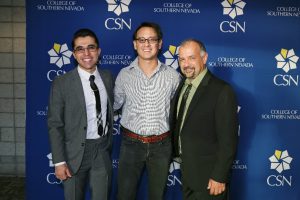 CSN alumni and No Greater Odds star Carlos Holguin, NGO Director Patrick Wirtz with CSN Videography Professor and NGO Producer and Cinematographer John Aliano pose for a photo before the campus premiere of No Greater Odds. Below, College Promise Campaign’s panelists speak about college affordability and Promise programs across the nation. 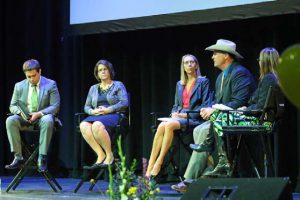 Legislative Affairs for Young Invincibles and Dr. Nancy Brune, executive director of the
Guinn Center for Policy Priorities and CSN IAC chair. It was an honor to have such an esteemed panel on campus.

No, we have no indication that the projected state deficit will impact the current year budget (FY17). The projected deficit has prompted the Governor’s office to request the 2017-2019 biennial budget from all state agencies, including CSN, with a 5 percent reduction. The college displayed this as a one-line item reduction without specific reductions to areas or departments. The Governor’s office will evaluate the biennial budget requests from all agencies to create his budget, which will be announced in late January.

“When will we develop the Northwest Campus?”

This fourth campus for CSN still has multiple steps to its development, and the first ones begin at the December meeting of the Board of Regents. We have been working to get the legal documentation in order, title to the property and approval of a revised development agreement with the City of Las Vegas. Both items are on the December agenda of the Board. Concurrently, we’ve been holding discussions with a development partner. Finalizing those discussions will be the next important step.

“When will we break ground on the new student unions?”

Student unions on each of the three campuses is a priority for student leaders and for CSN generally. General programming elements are completed, initial discussions on financing have begun, and we are aiming for the March meeting of the Board of Regents for fee and project approval.

“What is the role of the ombuds office?”

Several years ago two ombudspersons were appointed and trained to facilitate the sharing of information and to assist with conflicts as they may rise. Dr. Jennifer Basquiat and Mark Rauls serve as our ombudspersons. They operate, and must operate, with considerable autonomy. Each year they share with me themes or topics that could be better addressed through the President’s office, but other than that I’m at arm’s length. No names or details are ever shared. Employees can approach the ombudspersons with full anonymity and confidence.

This entry was posted in Monthly Chronicles. Bookmark the permalink.