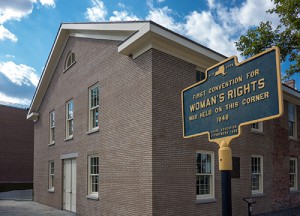 Our library catalog will guide you to books and films on all aspects of women’s history. You’ll find books about the first women’s rights convention in Seneca Falls in 1848, which addressed women’s issues of the time (such as not being allowed to vote) as well as films such as PBS’s One Woman, One Vote and National Geographic’s Women’s Suffrage.

Our Issues & Controversies database has a timely article that debates the current status of women’s rights in American society, citing workplace concerns, reproductive rights, and participation in politics as key issues of the modern era. In our Kanopy film database, you’ll find a featured collection called International Women’s Day that includes films highlighting women in science, health, business and politics. We also have books about women and leadership positions, such as the best-selling and controversial Lean In, by Facebook’s chief operating officer Sheryl Sandberg.

If you need help using any of these sources, just ask a librarian!

Speaking of librarians, be sure to stop by the college’s Women’s History Month events throughout the month of March.  On March 24, the Henderson campus will host a mixer event in Room C-133 from 1-3pm, with many CSN faculty—including one of our librarians—presenting on women’s issues. On March 31, the Cheyenne campus will host a day celebrating women achievements and cultures, complete with a library display in room N-103 from 2-6pm.

There are many ways to celebrate women’s history and women in society today. We’re happy to connect you with the resources to learn, take action, and feel pride in what women have accomplished!