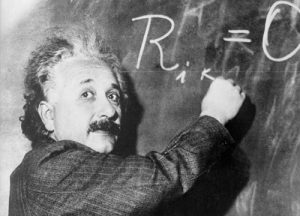 Happy New Year! It’s a new year and a new beginning. Many of us reflect upon what we wish to change about ourselves when the new year begins. It seems natural to look back and then imagine a new and improved future. 2017 is offering each of us that opportunity. I have some resolutions that I have made and I hope you were able to take the time to think about your life goals and aspirations.

In thinking about personal success, each us defines that in our own way. A big influence can be our belief in what is possible for us. I looked at some recent research on how belief systems relate to academic success. In the libraries we see and support many students studying and working on math and science and often students tell us that “they are not good in science” or that “math is not my thing.”  While past performance or background in subjects may influence current abilities; according to research individuals can change their path.

Some talented scientists struggled when they were in high school and college including Albert Einstein, often named the most important scientist of the twentieth century. How could a man who won a Nobel Prize in physics not excel in all school subjects?  Recently research showed that high school science students who read stories of great scientists’ struggles in either their academic studies or in life; performed better in their science courses than similar students who read stories about the scientific accomplishments of the scientists. This study showed that exposing students to stories of scientists’ struggles improved their science-class performance (in terms of class grades), whereas exposing students to scientists’ achievement stories did not. Among the research participants who read about the ‘struggles’; all the student’s grades rose no matter their previous achievement.

As the study documents; “Highlighting struggle as a normal part of learning is especially important in the science domain because of (a) the common belief that success in science requires exceptional ability (H. Hong & Lin-Siegler, 2012; Safdar, 2013; Shumow & Schmidt, 2014; R. Stinebrickner & Stinebrickner, 2008; T. R. Stinebrickner & Stinebrickner, 2011, 2013), and (b) the inevitable repeated failures involved while designing scientific experiments (Shumow & Schmidt, 2014). “1 The message that even successful scientists experience failures prior to their achievements may help students interpret their difficulties in science classes as normal occurrences rather than a reflection of their lack of intelligence or talent for science.  To me, this research is terrific news as it shows that belief in one’s self along with hard work can lead you to academic success in courses you found difficult in the past.  Perhaps Einstein himself said it best in these two quotes.

“The only thing that you absolutely have to know, is the location of the library.”
― Albert Einstein

Best of luck in the Spring semester and in all your endeavors.